African art and its importance in contemporary ritual arts

"I could talk about African art quoting names, ethnic groups, more or less known and explored zones because today, thanks to texts, witnesses, videos and photos, it seems possible, to whom may be interested in this topic, to grasp its every little nuance.
The magic miracle that happens every single time, instead, is to discover that perhaps there is some other little sign, some little mystery, that awaits to be discovered or interpreted. The simple and universal language, that those very pieces of tribal art have taught me, can paradoxically be found in their complex forms…
It is not by chance that during the history of modern Western art painters and sculptors have been fascinated by tribal art. Matisse, Matta, Gauguin, Picasso, Braque, Brancusi, Moore, Lam have drawn inspiration, innovation and artistic lymph by those plastic and archetypical figures, so alive in their ancestral lure and spirituality.
However, this is not the characteristic I want to discuss, because it is undeniable how it has intensely entered the art of great artists, in such a way that some of them got inspired by it to reach their final style.
What interests me is that this tribal art has been fundamental for the spiritual growth of those who still do ritual art outside of the African continent living their everyday life and also of those who are enthusiast collectors of said art. Masks, sculptures, common objects must have a dialogue, a relationship, even in an unconscious way, with said people. In fact, these objects are in their motherland an extension of the territory, the important centre of a social life which is the cornerstone of the very community; they are, at the same time, children and mothers of the same culture they live in.
The one who owns an ancestral, archetypical statue, or “spirit”, is inevitably influenced by it, "especially in our contemporary era, where the intimate and "romantic" side of things is left behind, giving more importance to the material and "materialistic" one.
Our culture is based on speed, on the rationalization and the optimization of spaces and time. And it is here that the intrinsic message of the African, Oceanic (or from other tribal regions) piece of art appears and becomes very clear, emanating a will to go back to our origins, to man, to our instinctive and animal side, which is fundamental to life and living; true “Freedom”, if we want to use a wider term.
I am very sensitive to the magical influence emanating from these artifacts and to the link that connects African art to the modern ritual one. 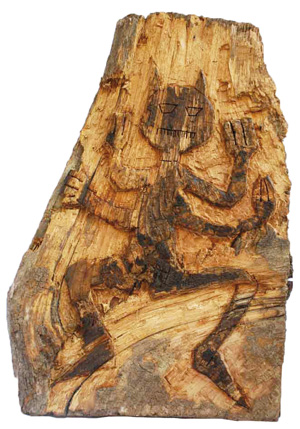 To someone, ritual art is a kind of art which is useful to get in contact with ourselves through the “rite”, to others it is only fundamental that there is an “object” capable to make for a connection to that dream-like dimension inside of ourselves that we would often need to contact.
I think that the spiritual dimension, when correctly in balance with the material one, is the basis for a serene life and I pursue it within my society, with nor effort nor shame, making my life of the rite.
We can metaphorically find this representation in the magic love rituals, where two conveniently sacred statuettes are bound together to wish for the future union of the two individuals, but also the union of the two parts of the same person (body and spirit), without which that very person could not survive. 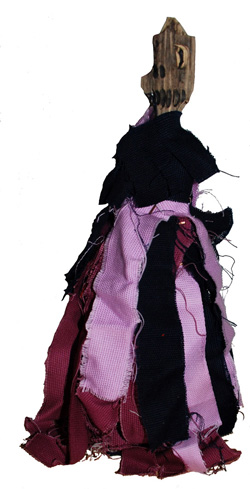 Personally, I would like to underline how the African “fetishes” have transmitted me the taste for a “form” of expression, the tapa of Fiji Islands or Asafo flags have given me the idea of signs to create an alphabet of my own, an almost cryptic one, fit for an esoteric idea which is the main way to deepen the knowledge of ourselves. The beauty hidden in these tribal arts is the teaching of Mother Earth, which takes us to Nature.
It would be absurd that contemporary ritual art completely copied that tribal artistic manifestation, because the cultural and territorial episteme it moves in is very different from the African one but, without its fundamental contribution, we would not have contemporary rituality.
My fetish, for example, is the result of such teachings, but it was created in an artistic blend between me and the daily dialogue with nature and the space surrounding me. The principle is the same that moved and moves the hand of the creators of primary art everywhere.
Symbols, the respect for what is supernatural, the cult of our ancestors, the memories that must be carved into stone in order not to lose our heritage, the cryptic language that only those who love nature can understand, can all be found in the cloth masks, in the concrete fetishes, in the sound of hand-made instruments played on the river banks… And they should not get lost."

Thank you very much "massy". And big tanks to Detoursdesmondes