"The history of dolls is centuries-old: made for ritual votive purposes, their traces have been found in the most ancient societies. Afterwards, they became ludic objects increasingly involved in mass distribution.
Dolls have been made with various materials such as paper, cardboard, wood, porcelain, wool, and they have been crafted in all shapes and dimensions to make precious play “objects”. But a deeper, archetypical importance lies in the object “doll”, a value that goes beyond the mere pastime or home accessory.
First, the doll (plush toy or baby doll, depending on the materials it is made of) is the more or less caricaturized image of the man; this direct bond causes an intrinsic relationship between the “toy” and its owner, a relationship made of exchange and interplay in which the user can imagine, express, and concretise all their anxieties, their doubts, their incoherence and their fears. 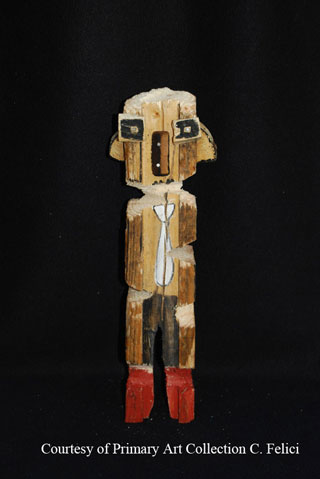 Dolls, therefore, can be seen with no further doubt as the mirror of society, of territory, its inhabitants and their tradition and rituality. This everlasting ritual link connects Central-Western Africa (Cameroun), Central America (St. Blas Islands, Panama coasts and internal Columbian woods), Southern Europe (Northern Tuscany area, Italy) and Eastern Asia (Japan), places where today survives a strong rituality connected to these traditions.
In Africa, specifically in the Cameroun area, the Namji tribe creates wooden dolls embellished with beads, feathers, cloth and many other elements. Their final purpose is to be given to young girls, who will play with them and, at the same time, receive a propitiatory influence on their fertility. Girls give a name to such dolls, nourish them and take care of them, carrying them everywhere they go, creating an uninterrupted dialogue. This ritual contributes to prepare the young Namji woman to maternity.
It is not by chance that I have mentioned my “Gio'o dolls” in this article, because they, like the Namji dolls, have a “propitiatory” function. The name of my creations comes from the word “gioco” (game in Italian) that in the dialect spoken in my area (Serravalle Pistoiese) becomes “gio'o” (the 'c' is silent).
I chose this name because playing is an essential part of the human being, at any age. Playing is the easiest way to learn to relate to others and to the world around us. The ritual characteristic of “Gio'o dolls” does not lie in their final form, but in the act of creating them, which I perform as a real Mantra. I often feel lonely, but not the kind of physical loneliness of those who have nobody around them, rather an absolute loneliness that, in some cases, feels like a painful “interior emptiness”. This generates a sense of misery in me, which is the cause of my continuous need of human interaction; I fill this void with the creative ritual of “Gio'o dolls”. The holiness and the monotony of the actions, which start with choosing wood to create the doll and end with the final opera, coloured and decorated, are a sort of repetitive prayer that has the power to alleviate my pain. The doll I created, therefore, had the aim to protect me from the demon of loneliness and also became the keeper of the memory of its creation when, during all the stages of the process, I never felt lonely. 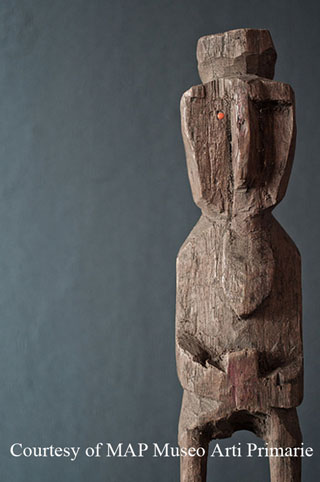 The protective and curative side of the process is even more evident in the Central American area, where the Kuna (Cuna) people, about 20000 individuals living between St Blas Islands and Colombian forests, makes some “Spirit dolls” called Nuchu.
They are made with wood and their appearance can range from being simple and instinctive to more detailed and elaborated. What stimulates my curiosity about Nuchu dolls is that they are not crafted by a single person in charge of this work, but by two entities, as if the creation of a ritual object (a doll, in this case) was a process of enrichment through “passing down” a tradition within a tribe, instead of being a single work of the shaman (curandero, tribal doctor or whatever other name we want to give to the spiritual and curative leader of the tribal society).
The first step in the crafting process is made by the woodcarver, who decides the shape of the doll according to their ability, then the doll is given to the local doctor who has the power of inserting a “spirit” into it.
The spirit that will find a home in it will always be a positive, good natured one, will never be negative, dangerous or evil to other people because the ritual value of these dolls lies in the protection of their owner's health. In fact, it is a popular belief that “bad” or “evil spirits” often get into the body of an ill person to make their recovering harder. 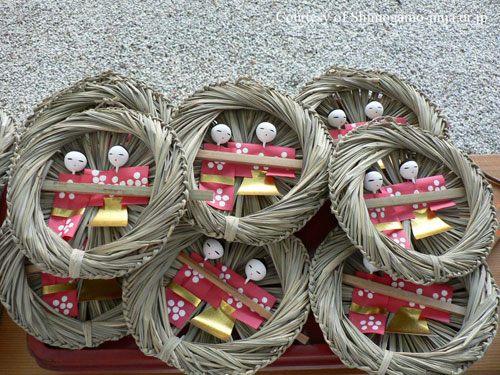 Nuchu dolls are created to prevent these events.
Great importance is given to evil spirits and health in the ancient ritual of Hina Nagashi, which is performed in Japan during Hina Matsuri (Festival of Dolls).
It is a popular belief that these bidimensional dolls (but the traditions vary from region to region) , made of wood or hay, can attract and trap inside themselves evil spirits and the ilnessess of young women; therefore, during the days of the Festival, it is a tradition to lay these dolls on watercourses so that the flow can take them away, along with ilnesses and evil spirits hoarded during the year.
The purpose of the ritual connected to the handcrafting of the doll changes, as we have seen, from zone to zone. The common trait of ritual importance uniting the various areas is to be found in the consideration and collocation of this image of a human figure between Mankind, the people who actually lives and walks on Earth, and an Superior Spirit. The latter, housed in the doll, becomes a concrete and familiar element, a sort of protector or guardian for its owner to the point of creating an unbreakable link of mutual enrichment between the doll and the person who possesses it. 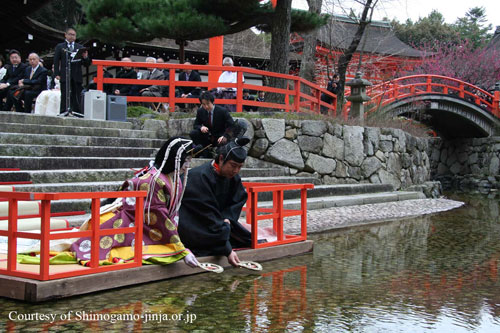